With less than two years until Brasil hosts the world in Rio, the Brasilians were underwhelming but for Bruno Fratus's 50 win tonight. Missing their sprint star, Cesar Cielo who declined the trip, they still managed a bronze in the men's 4x100 free relay but the six women roster failed to medal. Noticeably absent (as usual) were the Chinese who in typical fashion sent just a handful of swimmers. With no top South Africans either, the meet was a three-horse pony, with US and Australia dominating and Japan putting up some great swims.

Speaking of Japan, how much do you love the Japanese swimmers bowing after their races? I know it's nothing new, but it is lovely, especially when I think about how disgracefully I exited the pool after both good and bad races.

How much do you love that the Aussies actually bring back top swimmers to hand out medals instead of old white men from sports admin positions that no one knows. Three of Australia's best male swimmers (who all swam under under Denis Cotterall at one point: Dan Kowalski, Andrew Baildon and Grant Hackett) were in the house tonight along with legendary coaches Laurie Lawrence and Don Talbot all presenting medals. As they should. IOC and FINA please take note.

But mostly, how much do you love seeing world records? Maybe because I could never swim a whole 1500 long course fast, but I cried for Katie Ledecky tonight. She was absolutely sucking wind after destroying that race and I just feel so lucky to get to see her do it. It is an honour to watch great swimming and Ledecky did just that.

Canadian D-star, Ryan Cochrane defended his '10 title tonight with a 7:45.39 and said his rhythm was much better than earlier in the weekend. “I had mental energy in the 1500, I just didn't start out with a good rhythm and that is hard to build off,” said a smiling and positive Cochrane.

“It is exciting to have bad races and be able to get back up and race well to cap off the meet. The 1500 I was a bit tired, I am not using that as an excuse, but I was just not used to that at such a high level preparation. It's just new, it was hard. We went back into some pretty hard work then came down, but we had to do that to make sure that we didn't have any regrets.

“Last year I took 5 weeks off and I needed it to start the next Olympic cycle, but this year I have 3 days off then its back doing singles.”

In for silver by a breath in 7:47.73 Mack Horton (AUS) admitted that swimming Cochrane is exciting. “He definitely has experience over me and it is great to be able to swim against him and learn how he races,” said the soft spoken Horton. “But I can't wait to just crash,” acknowledged a relieved athlete after a long summer. In for bronze in 7:47.75 was 1500 winner Connor Jaeger (USA).

Under WR pace from the gun Katie Ledecky crushed her own world record by 6 seconds, winning by almost 50 metres in 15:28.26. Not that it really matters but this shaves 20 seconds off the Pan Pac record too.

“That was one of the most painful races, but not throw up worthy yet, but that kind of pain pays off in the end. I figured that I was on world record pace at the start, but thought I fell off in the middle because it hurt a lot. I was pretty sure I had it though, but 6 seconds was surprising. I knew it was the last race of the meet, and I didn't want to finish off thinking, 'uh, oh, I could have swum faster.'”

A more relaxed Ledecky spent time reflecting on her world record swims, “I am really just enjoying the journey and each step, hopefully there will be a few more steps...I am happy with all my swims this week. I think the 400 and 1500 are tied, but the 1500 is not a huge priority for me in my training as it's not an Olympic event, but it's definitely one of my favourite races.”

Kiwi Lauren Boyle held off a very fast finishing Brittany MacLean (CAN) for silver 15:55.69 to 15:57.15. Boyle was well off her Commonwealth record best of 15:44 but MacLean finished the season with a 13 sec drop to a new best and the first Canadian under16 min. Sporting a rad Canada headband made by her grandmother, MacLean wears the Maple Leaf with pride. “I am more patriotic down there [at Georgia] because I have to tell everyone how awesome Canada is, because back at home everyone already knows. But yes, I have to express myself and I have a lot of proving to do.” 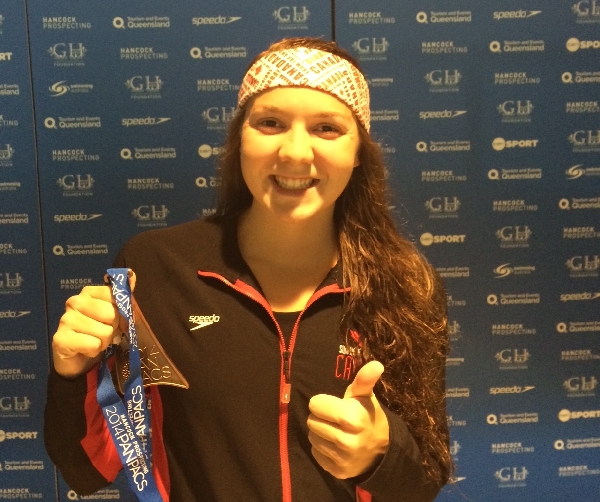 “I love that race, and I am so happy. That was way better than the 400. I am so happy with that result. I had a lot of great breaststrokers on either side of me so I just had to keep my stroke and just work it on the last 50.”

Dirado's swim was a personal best, but is well back from Hungarian Katinka Hossuz's top swim this year of 2:08.11 and Siobhan-Marie O'Connor (GBR) in 2:08.21.

With a World Champs berth on the line, World Record holder Ryan Lochte (USA) had to take it out hard in the B Final and swim for his spot. He did just that and held on fighting against only the clock. He swam much faster than heats, lowering to 1:56.02, which was the exact same time that Kosuke Hagino (JPN) won the A Final. Hagino has picked up plenty of hardware this week, but beating Michael Phelps (even if as Hagino admitted he is off his best) by .02 does not happen often. Phelps was clearly disappointed and summed up the meet later in the evening as one of “ups and downs,” clearly a reference to losing at the wall.

All three men split very differently despite their final times:

As she did in the 100, Cate Campbell (AUS) broke the meet record in heats, this time with a 24.35 to qualify first, but this time, she lowered it again in finals, winning in a scorching 23.96 tying Francesca Halsall (GBR) for the top time of the year. Her younger sister Bronte, was in lane 5 and added another silver with her 24.56, but off her best of the year (24.20).

Bronze went to Canadian Chantal Van Landeghem in a new Canadian record of 24.69 making it two medals for the Canadian 'Bulldogs' tonight.

“I wasn't expecting that at all,” said Van Landeghem after her swim. “I touched and had no idea what place I was, I was trying to count, but no matter if I was third or eighth, that is a best time and a new Canadian record, so I couldn't ask for anything more at the end of the meet.”

Van Landeghem turned around to anchor the women's relay to another bronze. “We did what we had to do, and I am super excited. I like to keep it loose, dance, joke, keep it light. Swimmers swim best when relaxed so that's what I brought to the team.”

Sydney Olympic champ, Anthony Irvin, enjoyed the morning sun here on the Gold Coast posting the fastest time, but he was no match for Brasil's Bruno Fratus who owned this race from the 25 when he accelerated away from the field. His 21.44 is just off Cesar Cielo's best of 21.39.

“Swimming the 50 is always a blast. It's my favourite event, that's no secret, but to present that kind of swim to such a passionate crowd, its an honour,” glowed Fratus. “I appreciate your inviting us and for cheering us on, I hope to be back soon!” When asked about his 'double-cobra' celebration he admitted, “It's a sprinter thing! We always do that back in my home country, it's kind of a joke!” And whether he will do this in Rio said the fourth place swimmer from London? “I need to be a little better, a little faster!”

Japanese swimmers Kanako Wantanbe and Rie Kaneto nailed their final turns to pull into the final lap just ahead, but it was Wantanbe who surged to victory in 2:21.41 over Kaneto in 2:21.90.

Aussie CWG gold medallist, Taylor Mckeown added a bronze to her summer hit list with her 2:22.89 while Kierra Smith (CAN) came in fourth with a 2:23.32.

“We had so much races today; I was very tired and I had a bit of doubt ,but so happy I won this race, thank you so much,” said the 17 year old Wantanbe.

It is fair to say the Japanese men own the record books in this event (World, Australia All Comers, and Pan Pac) and yet another man, Yasuhiro was on the cusp of adding his name to this illustrious list but fell just off the WR pace at the 175. His final time of 2:08.57 out-touched an aggressive swim of American Nicholas Fink in 2:08.94. Bronze went to Kazuki Kohinata in 2:10.14.

“I am so happy that I could prove that Japanese breaststroke is going strong at the 100 as well as 200 today,” said Koseki who won gold in the 100 earlier this weekend.

The Aussie girls were the class of the field, the critical leg by flier Alicia Coutts proving the key to gold. Their time of 3:55.49 was just shy of the meet record, but well ahead of the Americans in 3:57.41.

“Honestly, after that 200IM I was stinging,” said Coutts who split a 56.76. “But I stayed warm and relaxed and inside my head. I wasn't on the relay in Glasgow and I had to watch from the stands so it is great to be back on this relay. I just kept hearing them say 'Drop the hammer,' and I wanted to have a good race for Cate, not like she needs it!”

Missy Franklin who proved human this week was poised as always. “I am very excited to have the time to recover and rest. I learned so much about myself and my sport in the last 5 days and I am really lucky to be part of this team."

Echoing the sentiments of most US based college swimmers, Franklin said, “I start school in a few days, so it may not be mental rest, but at least it will be physical.”

Michael Phelps was pleased with the relay swim, but admitted his overall performance was made up of “ups and downs but there's no better way to end a great week of racing than being able to win that relay.

“Today my body was hurting, I got up this morning and I was hurting. But after my swim and nap, I felt peppy in warm up and if I learned anything from tonight's 200IM it would be to step on it earlier. This is my first big international swim meet being back and we accomplished our goals, I found some things I need to improve on. It's frustrating at times. I would like to win every race I swim.”

And there you have it folks, but like Phelps has ever needed fuel for his fire.